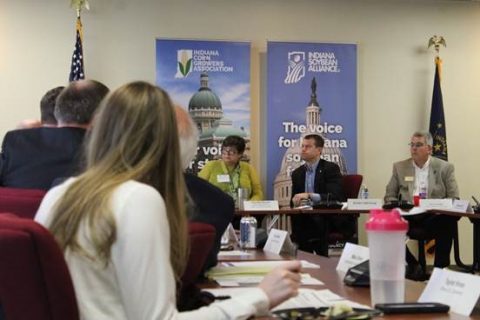 On Friday, U.S. Senator Todd Young (R-Ind.) met with dozens of agriculture stakeholders for a roundtable discussion hosted by the Indiana Soybean Alliance and the Indiana Corn Growers Association. The discussion focused on the difficult planting season affecting Hoosier farmers and opportunities for assistance at the federal level.

“The unprecedented weather and extreme field conditions have put Indiana farmers in a very trying situation,” Gov. Holcomb said. “The relentless rainfall has prevented many acres from being planted and in some cases farmers have not been able to plant at all. This not only affects crop producers but those involved in animal production and the businesses that supply them.”

According to USDA, there have only been 27 days suitable for fieldwork in Indiana since late March. That’s 20 days less when compared to the same timeframe in 2018. Heavy, consistent rainfall has saturated fields across the state. National Oceanic and Atmospheric Administration data shows that the past 12 months have been the wettest on record in the U.S.

The Governor is working with Indiana State Department of Agriculture Director Bruce Kettler and his staff, and the Indiana Farm Service Agency, to pursue options for agriculture assistance for Indiana farmers. That will include decisions about proceeding with requests for federal assistance as assessments are completed at the county level.

The Farm Service Agency needs an accurate account of the fields impacted by the storms in Indiana to determine if a request can be made to USDA. Farmers are encouraged to contact their local Farm Service Agency office and report their planted acres as soon as possible but no later than July 15.

Senator Young previously spoke in Washington on planting hardship this season and the need for clarification from USDA. Later on Friday, he met with Lieutenant Governor Suzanne Crouch’s office and Indiana State Director of Agriculture Bruce Kettler about efforts underway at the state level.

“Indiana farm country needs clarity in these uncertain times. I’m going to take the feedback from today’s meetings back to Washington to ensure our Hoosier farmers are equipped with the right tools to combat this crisis,” said Senator Young.

Ryan Martin, Farmer Origination Specialist for Louis Dreyfus Company in Claypool, IN and HAT Chief Meteorologist gave Senator Young an update on weather and crop conditions. He spoke with HAT’s Eric Pfeiffer after the event and that interview can be heard below.