The Purdue/CME Group Ag Economy Barometer slipped to 135 in March, down 5 points compared to February. The decline in the sentiment index, which is based upon a monthly a survey of 400 agricultural producers from across the U.S, can be attributed to the possibility of a trade war erupting. 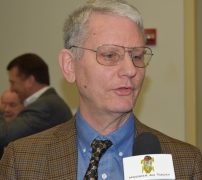 Dr. Jim Mintert, director of Purdue University’s Center for Commercial Agriculture, and an ag economist, said, “I think farmers are clearly aware of the importance of trade to agriculture in general, and in particular the impact it could have on livestock producers. I think our results this month suggest that they’re very aware of that, and I think that’s, at least partially, the reason why we saw a bit of a downturn.”

With China placing significant tariffs on U.S. pork, ethanol, and other ag products, is it possible that we’re already in a trade war with China? And if not, when will we know that we are in one? Mintert says that’s a good question.

Mintert noted that it’s important to compare these reports over time. Even though producer sentiment dipped in this report, “There’s still more of a positive aspect, or more of a positive perspective, on what’s taking place in US agriculture on our surveys than what we saw prior to the November 2016 election. So, that means people are still retaining some of that optimism. Some of that’s about the future; some of that’s actually about current conditions.”

You can read the full report here.