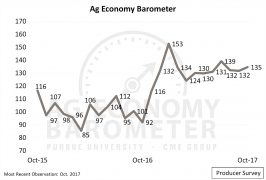 The Purdue University/CME Group Ag Economy Barometer has risen slightly in the newest survey of 400 U.S. ag producers. The October barometer is up 3 points to 135, the third highest reading since they started collecting data two years ago.

There are two sub-indices that determine the overall ranking, and one of those, the Index of Current Conditions declined just a bit. Purdue’s David Widmar says that could have been related to a relatively tough harvest across the Corn Belt.

“Some states are well behind,” he told HAT. “I also think that producers sort of have this unknown at the moment. We have a pretty large crop out there. Some yields are still unknown and commodity prices have sort of been baked in for a large U.S. crop, so there’s a disconnect about what farmers know about their specific operation, and then what the USDA and the markets already know about the size of the U.S. crop.” 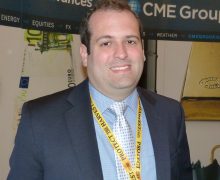 “What doesn’t change and is the static component is the type of operations that we’re surveying, so on a regular basis or every month, 53% of our 400 are corn and soybean producers. About 17% are wheat producers. Each of those slices of the pie is representative of what USDA says is out there across the country for corn, wheat, soybeans, cotton, beef cattle, dairy cattle and hog producers.”

For the second year in a row, producers were asked whether they plan to make management changes, such as lowering fertilizer or seeding rates, or adjusting their hybrid or variety packages for the upcoming cropping season. The share planning reductions in seeding rates and changes to their hybrid or variety choices for 2018 changed little from last October with 19 percent expecting lower seeding rates and 35 percent planning to adjust seed variety or hybrid packages. But the percentage of producers planning to reduce fertilizer usage in 2018 was noticeably smaller. Just one-third of respondents said they plan to reduce fertilizer rates in 2018, down from 46 percent a year ago.

“One possible reason for the smaller share of producers planning to reduce fertilizer rates in 2018 is prices,” said James Mintert, director of Purdue’s Center for Commercial Agriculture and principal investigator on the barometer project. “Fertilizer prices, particularly for anhydrous ammonia, are lower than a year ago. For example, recent price quotes for anhydrous ammonia were 20 percent lower than a year ago, with other crop nutrient prices exhibiting smaller price declines.”

For the first time, producers were asked about their expectations for farmland rental expenses in 2018. An overwhelming 80 percent of respondents said that they expect farmland rental rates to be unchanged in 2018 compared to 2017. The remaining 20 percent of respondents were split equally between those expecting rental rates to be higher and those expecting lower rates in 2018.