Slow Pace of Harvest Helping with Grain Movement and Storage

Harvest, both here in Indiana and across the Midwest, is moving along, but not at a breakneck speed. Given the size of the harvest, this is a good thing, says Mike Silver at Kokomo Grain. “The slow pace is good for the grain system and good for the farmer,” he stated. “At this time, we are able to load trains and move grain.” As HAT spoke with Silver on Thursday afternoon, they were loading a 100 car soybean train and had loaded an 85 car corn train the day before.  Silver says, as the harvest progresses, things are going to get tighter both for grain storage and movement. 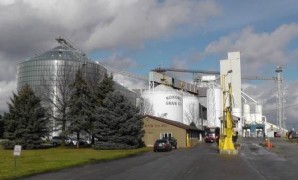 The slower pace has also been keeping pressure on cash basis levels from getting too great. Silver said, “Corn basis levels are beginning to creep a little wider, but we are still a few cents shy of the 5 year average price levels.” He added that the wet weather this week has kept nearby soybean basis levels firm.

The poll results from Hoosier Ag Today reveal that most Indiana farmers will be selling at least some of their crop at harvest. Silver says many producers are taking advantage of early premiums where they can find them, “Most producers are choosing deferred pricing (DP) contracts, storage, or minimum price contracts to retain some upside price opportunity for after the market puts in the harvest lows.”

Silver told HAT they have been hearing some soybean yields that are just “phenomenal.”  He added corn yields are also very good, but not quite at the level as soybeans.