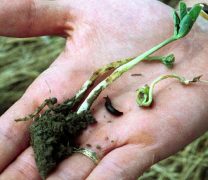 “Probably the worst I’ve ever seen” is how one agronomist describes the conditions farmers have faced while trying to plant crops in southern Indiana this year. Even though planting has now ramped up again and could be complete within a week, Matt Parmer says they’ve gone from one challenge to another this spring.

“We’ve had some beans that had to be replanted because of wet weather,” he told HAT. We replanted them, they came up nice and uniform just to be taken out by slugs. This has been the heaviest slug infestation that I have ever come across, at least down in southern Indiana region, and I think it’s a lot to do with a really mild winter, a lot more no till, a lot more cover crops. So, we’ve got an environment for them and then throw on the saturated soils and some of the cooler temperatures in May, it just made for a perfect environment for slug activity and slug devastation.”

The challenges won’t end with planting as farmers will need to watch their crops carefully this summer. Waterhemp is already a growing problem.

“We came off a really heavy waterhemp year last year,” Parmer said, “so we got the seed bank up and all of a sudden we had a really wet May, and waterhemp doesn’t get its name because it doesn’t like water. So it’s absolutely thrived and we’ve seen a lot of waterhemp pressure. So it’s been a good year to test out the Extend cropping system.”

With the late planted corn and soybeans keep an eye out for southern rust and gray leaf spot diseases, among others. Parmer added the early planted corn has gone through a lot and will need some pretty “forgiving” weather to help move it along.

Parmer is a DEKALB Asgrow technical agronomist. Hear all of his update:Matt Parmer early June 17