The Supplemental Nutrition Assistance Program continues to divide House Democrats and Republicans on the 2018 Farm Bill. Minnesota Democrat and Ranking Member of the House Ag Committee Collin Peterson said his focus has shifted toward working with the Senate on their version of the Farm Bill. He says there isn’t much that Democrats can do since they aren’t the majority, so they won’t spend any more time trying to fix the House version. 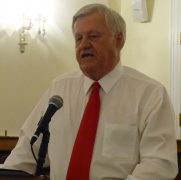 “You can’t put lipstick on a pig and have it come out in a good situation. This bill is not fixable. We shouldn’t even be doing this. So, my recommendation is going to be no amendments on the floor.”

Texas Republican and House Ag Chairman Mike Conaway says instead of working together on the bill after it was announced, Democrats spent time criticizing the bill for 5 hours.

“Not even an amendment to strip it out and start over. They care so little about engaging in legislative process. They just want to come in and yap and complain. We listened to it politely. They got all the time they needed to speak their peace. They had plenty of time to offer amendments, and my colleagues chose not to.”

Conaway said he now has to convince House leadership that he has 218 votes to get it through the House.

“When that vote’s called, the red and green lights are going to go up behind the Speaker, and they’re going to go red or green. Not red Republican, green Republican, red Democrat, green Democrat. The green votes will say, ‘I stand with rural America. I stand with all those folks out there who have suffered through this 50 percent drop in farm income the last 5 years.”

Conaway did add that he’s not arrogant or naive enough to believe that the bill introduced in the House will be the final bill. He and Peterson both believe it will go to conference in an attempt to meld the House and Senate bills. He hopes the House vote will happen in May.