What is the level of sulfur in your soil? There is a good chance you have a sulfur deficiency and there is a push to check for those levels and consider when you might need to add sulfur fertilizer to your management plans.

“We’re starting to see a lot more deficiency in that nutrient,” says Bill McDonald with Seed Consultants. “We don’t get the acid rain anymore, so we don’t get free sulfur anymore.”

Just how much sulfur does there need to be in that soil? 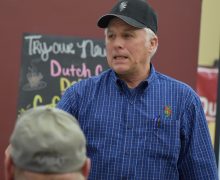 “A 230-bushel corn crop needs 23 pounds of sulfur,” he explained. “When we look at zinc or boron we only need a few ounces of it, but when we look at sulfur we need twenty some pounds, so we’ve got to start looking at supplementing our program with sulfur. There are a lot of ways you can get sulfur, whether it be ammonium thiosulfate, ammonium sulfate, 90 percent sulfur, gypsum, or a lot of retailers will carry an ammoniated fertilizer that will contain sulfur. So, there are a lot of ways we can get it. It’s just figuring out what will work in your program.”

A standard soil test is not going to give you the sulfur knowledge you need. McDonald says you have to ask for it specifically.

It’s not automatic, so McDonald, Director of Agronomic Services at Seed Consultants, Inc, suggests you order a sulfur test.