The corn crop in Indiana isn’t all perfect this year. It has been too dry in the northwest and too wet in the southwest. Parts of northern Indiana and a stretch from Miami to Randolph and Delaware Counties are even showing up on the nation’s drought monitor map. Although those sections of the state are just at the beginning stages of drought it is enough to affect corn development.

But in much of the state, Purdue Extension Corn Specialist Bob Nielsen agrees that some farmers are on their way to possibly record yields.

“Throughout much of central Indiana if you look at these fields that got planted timely and had good stand establishment, there is some awfully nice looking corn out there. Of course the USDA crop condition ratings tell us the same story. But there are some really good looking fields and not just looking healthy but they’re uniformly healthy throughout the field. So even in the midst of pessimism with corn prices there’s the optimism on a lot of peoples’ parts that maybe they’ll at least have a lot of grain to sell at these low prices.”

He told HAT much of the corn crop has moved beyond the critical pollination period and he wouldn’t be surprised to see the number at 75% in USDA’s Monday update.

The year has been mild overall when it comes to pests, according to Nielsen, and there have been very few insect issues. 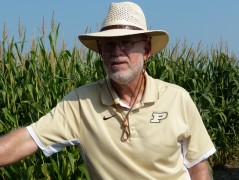 “Probably the only one that has caught some attention is heavier than normal moth flights of the western bean cutworm which can be a serious pest of corn. Most is this across part of the northwest part of the state where some of these surprisingly high moth counts have been occurring and I’ve chatted with a few people that are concerned about that. So that’s something that probably needs to be watched for, especially in the northwest part of the state.”

Nielsen adds foliar disease around Indiana has been almost a non-issue but it is something to monitor closely now that warm and muggy conditions are here, conditions conducive to disease infection of the corn crop.