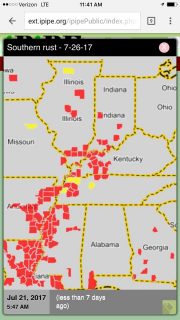 Southern Rust was discovered in Indiana last week, and indications are it is spreading statewide. One of the first infestations was discovered by Brian Bush in Bartholomew County. Bush, an agronomist with DuPont Pioneer, says that so far the spread has been slow. “The lower temperatures and humidity over the weekend I think has kept the rust from exploding like it did last year, he states.

Bush is concerned that the disease will continue to move, especially impacting our later planted corn, “The corn that was planted or replanted near the end of May is very vulnerable.” He said, with normal August weather, the disease should have the right conditions to spread, “The disease needs about 15 hours of leaf wetness and temperatures in the upper 70s. So, with normal August weather, Southern Rust will continue to spread.”

When rust first moved into Kentucky, many growers in Southern Indiana started spraying fungicides as a preventative. But Bush warns that some of those applications may have been made too early, “Most of the fungicides only last about 3 weeks, so if you sprayed more than 3 weeks ago you may be vulnerable to infection.” 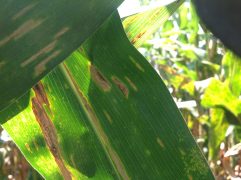 Southern Rust is thought of as a southern disease, but Bush says we are seeing it move north in Indiana. “I have seen samples from Tippecanoe County and even Allen County,” he says. “I think it is moving further north than we anticipated.”

Mike Meyer, an agronomist with DuPont Crop Protection, is recommending “Aproach Prima fungicide. The fungicide has two modes of action that are effective against Southern Rust.”  He recommends growers scout their fields and take action quickly if an infestation appears.

Last year the disease moved very rapidly and caused major yield loss in some areas. “I have seen a field go from perfectly okay to devastated by Southern Rust in as little as two weeks,” says Bush.

Track the movement of Southern Rust: