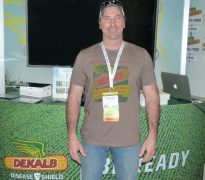 Do you have a specific plan to fight off disease attacks in corn and soybean fields this year? A southwest Indiana farmer learned a lot about what plan to put in place this year, based on an aggressive spread of disease last year. Kevin Kalb is a perennial corn yield contest winner from Dubois County. He says 2016 is a year southern Indiana will never forget.

“We started off with a little bit gray leaf spot and some northern corn leaf blight and then later, about the middle of July come this southern rust that we were really not associated with. We have really never seen that disease, so it was a hybrid that killed some corn in 6-7 days. It was just bam, hit us.”

But because of the disease influx and his own yearly high-yield, high-managed test plot, Kalb witnessed what really works on his farm.

“We had the opportunity to put in two of the Disease Shield hybrids in there and we had two other competitors’ numbers in there. This was planted the 19th of April and the DEKALB numbers were already starting to shine as far as seeing no gray leaf spot and no northern, where the other hybrids were starting to see northern first and then gray leaf spot come in last.”

It was with the arrival of southern rust in mid-July that Kalb came to the conclusion that DEKALB® Disease Shield™ is a game changer on his farm.

“Even though we sprayed fungicide on it several times there was an absolutely day and night difference as far as lodging, as far as plant health,” Kalb told HAT. “It absolutely did not seem that the southern rust affected the Disease Shield hybrids hardly at all.”

With availability for the 2017 growing season, he plans to plant that package on 90 percent of his corn acres this year.

Kalb was honored again at Commodity Classic as a National Corn Yield Contest winner and credited starter fertilizer and other strategies, good genetics, and a great team for his success.