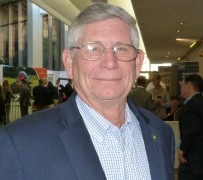 As with any product or commodity, if the buyer has a preference for your brand it increases your opportunity for profitability. That holds true for U.S. soybean growers too, according to Frankfort, Indiana farmer Mike Beard, a director on the United Soybean Board and the board’s Meal Target Area Coordinator. He says USB has a strategy to develop preference for U.S. soybeans.

While many animal and aquaculture producers appreciate the superior component value of meal from U.S. soybeans, Beard says USB is trying to boost protein levels in beans from some parts of the country.

“We’re concerned that the northern tier of states that produce soybeans and export out of the northwest have soybean protein levels that are somewhat lower than those of us in the Midwest, so we’re studying how to possibly bring those soybean protein levels up in that production area,” Beard told HAT. “And in collaboration with a major seed company we’re seeing some results from that.”

USB continues work to create soybeans that meet the individual nutritional requirements of the swine, poultry and aquaculture industries.

Beard says the success in working with seed companies to develop high oleic soybeans to meet the demands of oil customers gives him added confidence as USB works to develop the designer bean varieties.