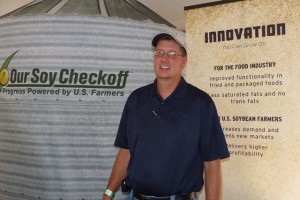 Challenges like the struggling global economy and trade barriers did not slow down U.S. meat exports in 2012. It was a record year for U.S. poultry and livestock exports helping keep domestic demand for U.S. soy strong, according to Illinois farmer and United Soybean Board Director David Hartke.

“Every time we export meat we’re exporting soybean meal through the meat product itself. In Illinois for an example we’ve got a higher basis on our crops because the livestock is throwing that demand out there for the soybeans, the soybean meal and corn, and high waters raise all boats.”

The soy checkoff partners with organizations like the U.S. Meat Export Federation (USMEF) and USA Poultry and Egg Export Council to market U.S. meat and poultry abroad. The checkoff and USMEF are having success too. They helped increase consumption of pork back ribs in Japan from zero to 4.5 million pounds over the last three years.

The U.S. meat and poultry export figures for 2012 include: