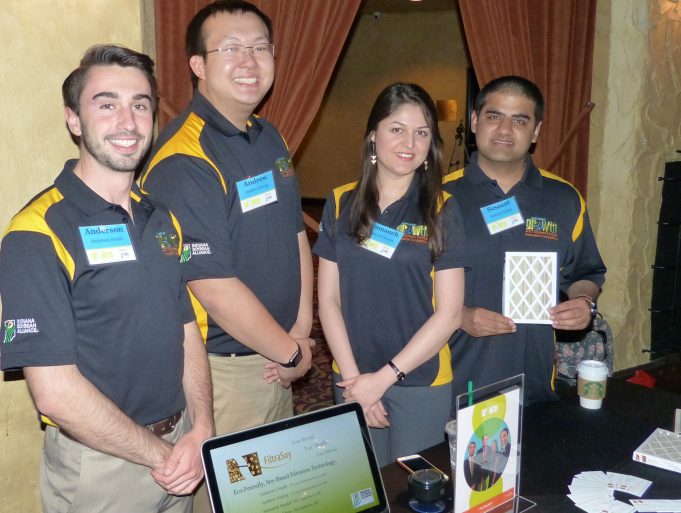 Sixteen teams waited to learn their fate Tuesday night when the awards were handed out in the annual Purdue Student Soybean Product Innovation Competition, funded by Indiana Soybean Alliance since 1994. Winning the first-place prize of $20,000 was Team FiltraSoy, makers of a soy-based air filter for use in residential and commercial HVAC systems.

“What could we make out of soy that would have a really rapid life cycle, since our goal was to create a biodegradable product but one that would drive a really high demand for soy, just to help farmers out in Indiana and all around the U.S. So, we thought of a soy based filter since that has a really rapid life cycle and everyone needs an HVAC filter in their house. We thought that could drive up the demand for soy by quite a bit.”

He told HAT the team investigated what goes into manufacturing the paper in the paper-based filters to get ideas for what would be their soy-based manufacturing process.

“It’s kind of similar to the paper manufacturing process,” he explained. “There are about 2 or 3 different physical and chemical processes that our product goes through before it’s finally ready to be an actual air filter.”

The comparison to paper systems is quite favorable according to the team.

“We compared it based on the cost of production and also the filtration efficiency and it’s actually 15% more efficient than what’s on the market and it’s one-fifth the cost to actually produce our product as compared to what’s out there.”

More efficient and much cheaper. Those are ingredients for an attractive product in the marketplace, and Smith says they have a plan to get there.

“This upcoming fall there’s something called ag venture funding which is grants for students or faculty who have some sort of an agricultural based product that they would like to take to market. So we plan to pitch our product to that and hopefully be able to secure a little bit of funding so that we can take our product forward and actually launch it into the marketplace.”

FiltraSoy also won the People’s Choice award Tuesday night. Other team members are Andrew Huang of Potomac, Md.; Sushant Mehan of Delhi, India; and Samaneh Saadat of Shiraz Fars, Iran. Smith and Huang are both seniors in environmental and natural resources engineering, and Mehan and Saadat are both agricultural and biological engineering PhD students.

Third-place went to Soy Droplet which developed a freeze-dried soy-based snack. Members are Peili Wang of Dongying, China, and Wenwen Zhou of Shanghai, China, seniors studying food science. They won a prize of $5,000.

Finding innovative new uses for soybeans that meet a market need and ultimately increase demand for soybeans is the reason Indiana Soybean Alliance has funded the competition since 1994. Tomorrow: Why this is such an important and long-running program from an ISA board member and judge of the competition.