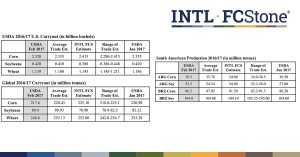 This month’s world supply and demand report from USDA was released Thursday, and the soybean market fell after the midday release. Arlan Suderman at INTL FCStone said the reason is Argentine production was lowered, but not as much as expected.

“USDA lowered the Argentina soybean crop by 1.5 million metric tons, but that was less than the 2.5 million metric tons expected,’ he said. “The other takeaway that created selling in the soybeans was the fact that USDA once again failed to raise its export target for U.S. soybeans, and we’ve been both selling and shipping well ahead of the pace needed to hit USDA’s target. But the agency continues to think that’s going to shut off rather quickly and abruptly here soon.”

“USDA raising the ethanol demand usage estimate by 35 million bushels, and increasing China corn demand by 4 million metric tons, I thought those were a couple of keys. One directly impacts the market now, one is more of a positive longer term.”

Overall there was almost no January to February change in South American corn and soybean production estimates.

“It’s really a wait and see attitude for South America,” he explained. “There’s a sense that the Brazilian soybean crop will get bigger, the Argentine crop may get smaller. I have less confidence now in the latter than I once did with growing conditions there improving.”

He said the big question remains the 2nd, or safrinha corn crop and whether it will be big and bearish, or a small crop that supports prices. It’s too early to know as the bulk of that crop is yet to be planted.

A beneficiary of the report was the wheat market. It bounced higher when USDA bumped wheat exports on good demand for hard red winter and hard red spring wheat. Suderman told HAT the number was expected but came sooner than an expected March and April adjustment.