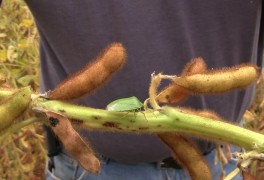 Johnson County, Indiana corn has some issues going into the harvest season, but the soybean crop is very promising, a scenario common around the state. Just southwest of Franklin late last week some late planted beans weren’t quite ready for harvest, but Bill Mullen, at Seed Consultants said it should be a good yielding crop. 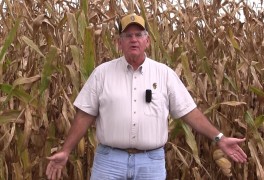 “We caught some rains when we really needed it for pod filling time,” he said. “As you can see on this plant here the nodes are close together, and our clusters, 3, 4, 5 and 6 to the node. There’s some of these plants that are holding 4-bean pods, so the likelihood this year is what the stress has hurt for the corn probably hasn’t hurt the beans quite as bad, and I really anticipate our bean yields are going to be as good as last year, and some places a little bit better than that.”

Mullen did spot a bean where the pod itself had opened. He said that’s a field that should be targeted for harvest priority.

“These beans that really had some issues, lack of moisture for a period of time, the health of the pods started to deteriorate and it started hitting the ground. Go into your fields and look, not so much on the outside, go in the inside of the field a little bit and see if you see any of the beans laying on the ground.”

But for corn in that part of Indiana it has been a year with a litany of issues. 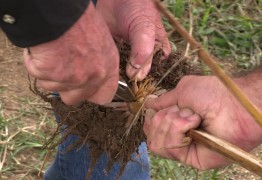 “Moisture stress, lack of moisture and the high heat after pollination, and we’re seeing dropped ears,” Mullen said. “In many fields we’re seeing European corn borer that went into the stalk and up through the ear shank. There are some places where the ear shank really didn’t develop as good because of the stress.”

He said those should also be harvest priority fields since heavy winds can knock the ears to the ground. See more of what Mullen found in the new HAT video.