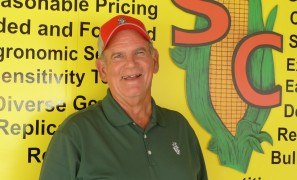 Prioritizing which fields to harvest first is underway now for those farmers who have yet to begin pulling the combine into the field. Lodging may be an issue in some fields that had to withstand recent heavy winds in southern and central Indiana. Agronomist Bill Mullen says pay attention to those fields.

“It kind of lodged the corn plants over,” he said. “When you start to see that or any other issues where the corn might be dropping ears because we got some ear shank development under those dry conditions, keep that in mind. Stalk quality with the ear retention on stalk, these are conditions we need to look at and get those fields harvested first.”

Mullen, with Seed Consultants, also wants you to walk fields and be sure you know what ear molds are present. They’ll impact grain quality and yield in this year’s corn crop.

“The molds are for real. Go back about three weeks when we had some heavy rains come through. Ears were sticking straight up. We’ve got moisture down there between the husk and the grain and starting to get some mold developing. Plus, there was some corn earworm, insect issues, and with the moisture molds started. I know we’re getting close to harvest, but walk the fields because there are issues out there.”

Issues in corn across the Midwest have many doubting USDA’s yield projection. But Mullen says soybeans will be the silver lining.

“The rains about three weeks that affected the corn, but with the soybean pods trying to fill out I really believe those rains put on another 2-4 bushels. I’m hearing people talk around Flora, Indiana (Carroll County) on a 2.5 bean of ours that went 81 bushel to the acre. We’ve got a 2.1 bean on sand that went 69 bpa, but they hit the rains.”