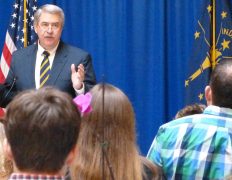 At Indiana Ag Day festivities this week, the director of the State Department of Agriculture Ted McKinney touted the state’s growth in the agriculture sector. He had plenty of good news to share too, and it was just a snapshot of the economic development area alone.

“We’re just seeing such growth in the diversity of all of Indiana ag,” he told HAT. “I site the announcement of a new turkey hatchery over in Vigo County near Terre Haute which feeds into, among other companies, Farbest, which is expanding. And that all led a year and a half ago to the opening the big Boar’s Head processing plant near New Castle. So hear in one industry alone we have a hatchery, we’ve added a processing plant, and it just adds value and it adds jobs.”

McKinney added two construction companies have decided in just the last two years that they would locate in Indiana. Construction will start soon near Shelbyville on the Krone North America plant, and Haldrup near Fort Wayne is known around the world for their seed plot planters and harvesters. And there’s more.

“There’s the incredible growth in the barns for chickens and poultry, and dairy. We talk about dairy expanding, three processors in the last 2+ years that have added, and I think we’ve got a couple more, so this run of expansions, re-locations is just a sight to behold.”

What is attracting agribusiness to Indiana? McKinney says just look at the welcome signs when you drive into the state.

“Our Crossroads of America plays much bigger than most people realize,” he explained. “The business climate compared to many of our neighbors is just beyond reproach. The records we’re setting on ratings is unbelievable.”

McKinney says when you put all those things together in a mixing bowl Indiana can serve up a pretty good product now.