State Fair Board President Uhl Receives Sagamore of the Wabash 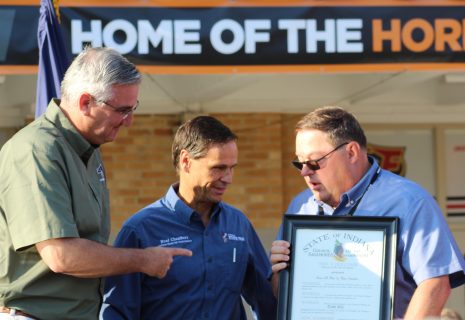 If you haven’t made your way yet to the Indiana State Fair, you have a little over a week to get there to enjoy the food, the free concerts, the rides, and the animals. Many people and much hard work goes into preparing each year for the fair. Outgoing Indiana State Fair Board President Todd Uhl explains that it’s a year-long process for the ISF staff and board members.

“We love the Indiana State Fair, so it’s not really a job. It takes a lot of time. We have a meeting a month plus we’re up here for the 17 days of the fair. In my case, I’m here 10 days before and three or four days afterwards, but it’s just an amazing place. We’re here to teach agriculture education and we work hard at that, and it’s just a joy to be able to put on the Indiana State Fair.”

Uhl is in his 8th and final year serving on the State Fair board of directors. For his commitment to the fair, Governor Eric Holcomb presented Uhl with the state’s highest civilian honor, the Sagamore of the Wabash award. Uhl told Hoosier Ag Today that he was shocked to receive the award and grateful.

“To receive it from Governor Holcomb, such a class act, that just means so much more, but I had no idea that I was getting that award.”

Uhl says even though he won’t be on the fair board, he will certainly still be around volunteering or becoming an employee of the fair to participate in some way. Uhl says if all else fails, “I cut a hole in the back fence so I can sneak in next year.”

The fair concludes on Sunday, the 18th.