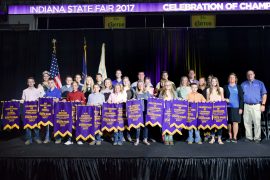 As the 2017 Indiana State Fair drew to a close Sunday night, one milestone remained for twenty-four 4-H youth whose hard work and dedication had earned them the right to attend the Celebration of Champions at Indiana Farmers Coliseum.

These young Hoosiers have spent the last year working hard to raise livestock of various species, weights, and classes, while others have grown crops, cultivated bee colonies, and built particle accelerators. Their work was rewarded during the Celebration of Champions’ dinner and program where each received a coveted purple banner.

Nearly $170,000 was raised by the Indiana State Fair Foundation for the youth development fund to provide monetary awards and the Celebration of Champions dinner to honor the accomplishments and work ethic of Hoosier youth.

According to 4-H member Remingtin Brumbaugh, a 3rd year 4-H member of DeKalb County who won Grand Champion Market Steer, “I just won the Indiana State Fair Steer Show and I’ve never done this show before. It’s a lot of hard work, but it paid off in the end.”

Many who competed had taken to heart the judges’ critiques from years past to improve year-to-year.

“I finished third Overall Market Lamb last year,” said Lane Slaton, a 7th year 4-H member from Hamilton County. “By just correcting what I did last year, I was able to turn it into success this year.

Those corrections helped Slaton earn a 2017 Grand Champion Market Lamb title. “I knew if I wanted to win, it’d take a lot of hours in the barn,” he said.

Other Grand Champions include:

Reserve Grand Champions were awarded to the following:

Members of 4-H frequently credit the organization with helping them to learn the value of hard work and dedication. They also express appreciation for the opportunity to participate in 4-H, not only for the life skills learned or the chance to compete, but also for the chance to make life-long friends from across Indiana.