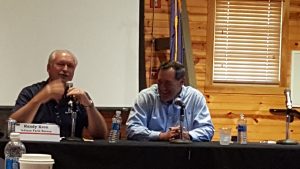 Indiana Farm Bureau and Senator Joe Donnelly hosted a Farm Bill listening session at the Indiana State Fair on Tuesday. It was an event that represented sectors of agriculture that do not often get mentioned in Farm Bill debates.

The usual players were there talking about crop insurance, conservation, trade, and nutrition titles; but voices representing small farming operations were also heard. Jeff Hawkins, from Wabash County, said big farm bills do not serve the needs of smaller farming operations, “You can shoehorn some of us small interests to receive some benefits, but overall, Farm Bills really need to address the more important issues that help our kind of agriculture.”

Sherri Dugger, speaking on behalf of Indiana Farmers Union, spoke out against current Farm Bill policy for putting farmers off the land. “This country has seen the loss of 95% of egg farmers, 90% of pig farmers, and 88% of dairy farmers in the past 40 years,” she stated. “These producers have fallen victim to politicians and industrial agricultural trade associations who are pursuing anti-competitive policies and practices.”

Some groups asked to be left out of the next Farm Bill. “We are not asking for a livestock title in the Farm Bill this year,” said Joe Moore, with the Indiana Beef Cattle Association.  He said that Country of Origin Legislation and new GIPSA rules have cost the industry millions of dollars and they do not want to see them return.  He did ask for funding for foreign market development funds to be continued, as it helped fund export efforts of the U.S. Meat Export Federation.

Mike Beard, from Clinton County, asked Senator Donnelly to support efforts to protect the livestock industry from a catastrophic disease outbreak like Foot and Mouth disease, “The risk of an FMD outbreak continues to increase as world trade and terrorism expand.” He noted that the U.S. currently does not have the resources to deal with such an outbreak should it occur. “We are asking for the establishment of an offshore FMD vaccine bank to maintain enough vaccines to handle such an outbreak.”  Several other livestock organizations are in support of this plan since an outbreak would completely shut down all U.S. meat exports with multi-billion dollar consequences.

Sarah Delbecq, a 6th generation farmer from DeKalb County, called for safety net programs that are more flexible and responsive to the changes in the farm economy, “You can have a flexible program that can adapt if we have a spike in prices or a sharp drop in prices.” She added that safety net programs should not be written for a specific problem, but should be flexible to deal with the changing markets of agriculture. Delbecq, vice president of Indiana Corn Growers, urged farmers to share their economic stress with policy makers so that they will begin to understand the current state of the farm and rural economy. 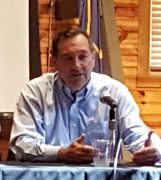 Senator Donnelly said he would work to make sure all interests were addressed in the next Farm Bill, “It was great to get this well rounded perspective, and I will be sharing these ideas with the Senate Ag Committee.” Randy Kron, president of Indiana Farm Bureau, told HAT writing this Farm Bill will be difficult because of the limited dollars that will be available, “This is why it is important to get an early start and get things on the table early.”

Other issues brought up at the session included the need for more forage for bees to improve the pollinator population, funding for the AgrAbility program which was cut in the Trump budget, funding for technical assistance for conservation projects, rate adjustments to the Wool program, and preservation of cash accounting in the tax reform bill.  Topics noticeably absent from the discussion included ethanol and funding for agricultural research.