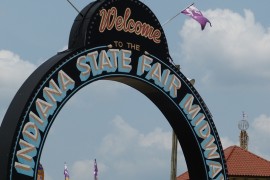 The Indiana State Fair, the Year of the Farmer, kicks off in one week and fairgoers, officials, and 4-H’ers and their animals could actually be spoiled by weather conditions when it opens Friday morning. HAT chief meteorologist Ryan Martin says it will be quite comfortable.

“We’re going to see cooler than normal temperatures come in over most of the state as we finish out next week and go on into the week following. Now I don’t think we’re looking at gloriously cool, well below normal temperatures for the entire fair, but as we move through the first 10-15 days of August, it definitely looks like we’re skewing things that way.”

Despite all that good news, there could be some soggy grounds at the start of the fair.

“We could see some potentially heavy rains as we go from Wednesday through Thursday of next week, so only a day or so removed from some of those heavy rains,” he said. “It might be a little bit sloppy and soggy in spots, but again just for the start. I don’t think that’s going to be a long term problem.”

“A little cool to start the month of August. I still think the month on the whole will end up a degree or two above, which means we’re going to be looking at weather pretty darn close to optimal for some of these soybeans. The warmer air and the sunshine that’s been a part of our statewide weather for the past week and a half to two weeks has done wonders for catching the slow beans up, and I think at this point this is about the kind of weather we’re going to want to have.”

Although cool conditions will greet Hoosiers as August begins, he says that doesn’t mean super cool, like highs in the 60’s. Expect normal to somewhat below normal temperatures in the first part of the month.