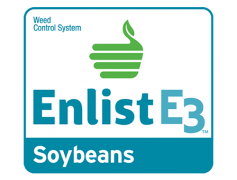 2020 marks the first full year Enlist E3 soybeans have been in the field. After many years of waiting, Rod King of Dairyland Seed, says it’s fun to finally see the results.

“The trait is here, the weed control system is here, and frankly, it’s been an awesome summer—very excited to look at a lot of acres and see a lot of good things,” he said.

With yields starting to roll in, King says E3 soybeans are solid genetically from an agronomic and yield perspective. King is expecting competitive yields.

“We have been looking at these beans for quite a few years,” he said. “We’re through multiple breeding cycles and it’s a proven trait—the trait does not have a yield drag like we often see with first generation traits, so excellent yield potential and we’re seeing that already.”

The other thing King has enjoyed seeing has been the weed control capabilities—in particular with Enlist One.

“Enlist Duo, which is a combination of the 2,4-D choline, Enlist, and Durango or a glyphosate, and then Enlist One, which would 2,4-D choline,” said King. “This was getting the most play because it’s so flexible. Farmers can tank mix a lot of different products with Enlist One.”

All in all, King says based on the results of the entire Enlist product line, it has been well worth the wait.

“The system, from a bean genetic standpoint and a weed control standpoint, is truly state of the art and second to none in the industry,” he said. “Very, very satisfied for year one and very much looking forward to year two.”