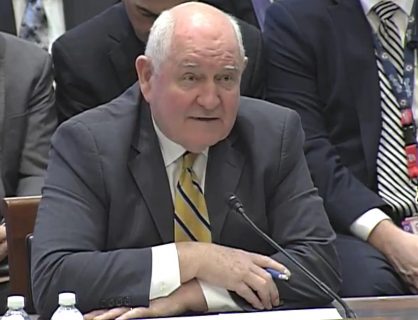 The full House Agriculture Committee held a public hearing Tuesday on the State of the Rural Economy. With declining commodity prices there were frank comments about the state of affairs in rural America.

“I’m very concerned that if prices continue to fall and we have any kind of an average year or below average year that we could be in some real trouble,” said ranking member Colin Peterson. “This is one of the reasons if I had my way I’d like to see a farm bill that had an improved safety net going into this situation. But, with no new money, I don’t know how we’re going to do that.”

The committee was briefed by USDA Secretary Sonny Perdue who acknowledged commodity prices are in a much different place than the last time a farm bill was being constructed.

“I wish there were better news but there is a lot of stress and a lot of duress on the farms today,” Perdue said. “The only saving grace for that is we’re talking about a constituency that’s probably the most resilient among Americans and the most optimistic or they wouldn’t continue to do what they do year in and year out in putting a lot of the risk of their equity in the ground hoping for that next good crop. So, the state of the rural economy is fragile.”

He added the ag committee will have quite a struggle ahead to create a farm bill with an improved safety net considering the current financial situation in Washington.

“By and large a safety net is really the goal of the farm bill, as well as providing for those who don’t have the resources for enough food, but there are a lot of challenges out there.”

Committee Chairman Mike Conaway from Texas spoke to the Crop Insurance Industry Annual Convention Monday and said the House Ag Committee bill they eventually move will include a strong crop insurance component, and he is ready to fight any attempts to weaken crop insurance.