Indiana FFA officers belted out the song “Come Alive” from The Greatest Showman during the opening session of the 89th Indiana FFA State Convention at Purdue on Tuesday night. Director of the Indiana FFA Association Rob Hayes is in his first year as the director. He says that performance set the stage for the rest of the week.

“So much energy from the students and from the state officers. It just seemed to be electrifying, really, for people to be there and experience everything; perfect kick off to everything going on.”

Hayes said there are around 3,000 blue jackets swarming the West Lafayette campus this week.

“We had hundreds of students participating in leadership and career development events and showing off what they’ve learned throughout the year, which is exciting. We’ve got a growing membership. We’re up to 12,500 across the state. So, to be able have about a fourth of our membership here to celebrate this convention and their achievements I think is perfect.”

Indiana FFA President Claire Baney says everything has come together very well for the convention, an event they’ve been planning all year.

“Our team has been working really hard on this for a very long time, and it’s the crazy to think that we’re here. The convention is going very well.”

She’ll be delivering her retiring address today during the sixth and final general session. What message is she trying to convey in her final address? 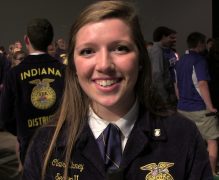 “It’s really centralized around the message that I’m really passionate about which is belief. A lot of times FFA members, and just as young people, we don’t think about where our belief can take us and take others.”