Heat and humidity settled in and storms delivered heavy amounts of rain in many areas, according to Greg Matli, Indiana State Statistician for the USDA’s National Agricultural Statistics Service. Temperatures helped crop growth and wheat ripening. However, some storms were severe enough to leave the standing water and some crop damage. The statewide average temperature was 77.3 degrees, 5.7 degrees above normal. Statewide precipitation was 1.77 inches, above average by 0.77 inches. There were 4.3 days available for fieldwork for the week ending June 18, down 2.4 days from the previous week. 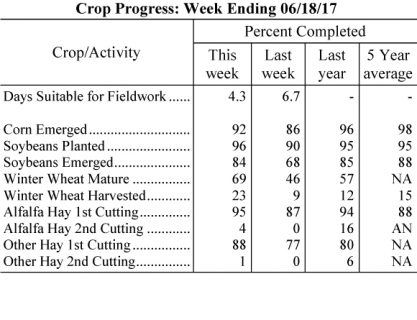 There were heavy amounts of rain in Benton, Tippecanoe and White Counties. Rain fell throughout the state but was heaviest through the central region, with lower amounts falling in southwestern and northeastern Indiana. Some wheat was blown down due to high winds. There was little change in crop and pasture conditions, but the recent window for side dressing and weed spraying appears to have helped corn. Livestock was reported to be in a little stress due to the heat.