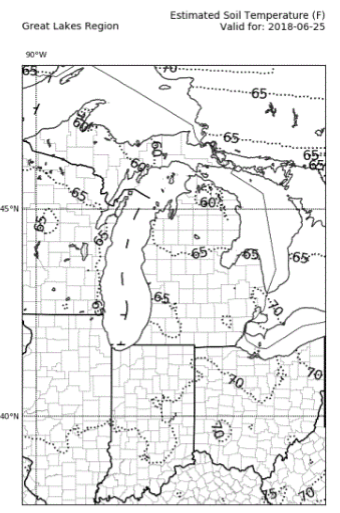 Nearly all areas of Indiana received rain last week which helped soil moisture levels, according to Greg Matli, Indiana State Statistician for the USDA’s National Agricultural Statistics Service. The week started hot and dry but midweek through the end of the week, the State experienced cooler temperatures and varying levels of rain. Farmers were receptive to the rain last week but hoped for a week of clear weather to aid crop progress. The average temperature for the week was 75.0 degrees, 2.4 degrees above normal for the State. The amounts of rainfall varied from 0.22 inches to 5.85 inches over the week. The statewide average for precipitation was 2.26 inches. There were 3.0 days available for fieldwork for the week ending June 24.

Rain last week provided relief to corn and soybean fields that exhibited drought stress at the beginning of the week. Soybeans blooming was progressing at a quicker pace than previous years. Some winter wheat was knocked down due to heavy rain and high winds. The southern portion of the State received less rain and was able to make greater progress with wheat harvest. Rain aided in the rejuvenation of pastures and hay fields. Livestock are reported to be in good condition. Other activities for the week included hauling grain, mowing roadsides and preparing for the county fair. 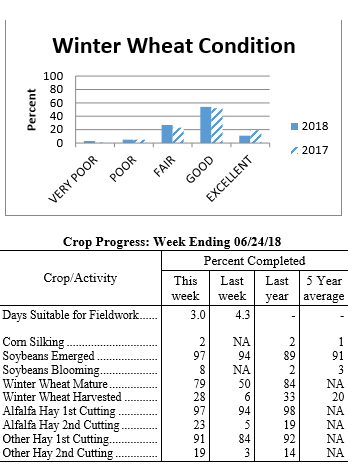 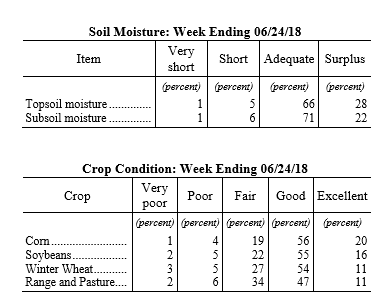