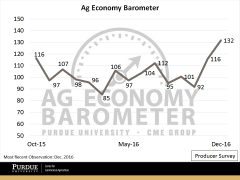 “Well I think the answer is yes,” says Jim Mintert, director of the Purdue Center for Commercial Agriculture which conducts the monthly survey of 400 agricultural producers. “Looking at our survey it’s pretty clear that something took place from the period prior to the election when we did our survey in October, through that December time frame when we did this last survey.”

He told HAT corn and soybean prices often drive the barometer, but that wasn’t a factor in this new report. 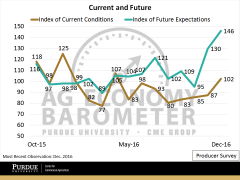 “It wasn’t driven by changes in prices. It really was about a change in attitude, and in our survey it was really focused most heavily on an index of future expectations,” he explained. “We asked several questions that are focused on the future. That’s what really drove the big change in the index, so this optimism about the future spilled over I think from the general economy into the ag sector, and that’s despite the fact that underneath it all economic conditions in the ag sector didn’t change appreciably over this time frame, but it really is about an expectation that things will be better. Of course, it remains to be seen if that’s going to be the case.”

Mintert said there was also an improvement in the November barometer and it is clear now that was part of the post-election bump. Purdue’s David Widmar says the rise in farmer optimism related to the economy “appears to parallel that of U.S. consumers.” The University of Michigan’s Index of Consumer Sentiment confirmed that observation when it went from 87 in October to a 12-year high of 98 in December.

In the Purdue/CME Group results, producer optimism rose in both current conditions and future expectations indices. The Index of Current Conditions rose to 102 from November’s 87, while the Index of Future Expectations increased from 130 in November to 146 in December.