2011 and 2013 brought record levels of net farm income for farmers. Obviously, it’s a much different picture today. Dr. Jim Mintert, Director of the Center for Commercial Agriculture at Purdue, spoke to members of the Agribusiness Council of Indiana last week to provide an ag economic outlook. Instead of focusing on those peak years, Mintert took a bigger picture look. 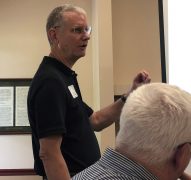 “If you look at it from a longer-term perspective, and maybe compare it to the 1990’s average, income is still down substantially, but not nearly as much as it is compared to those all-time peaks in ’11 and ’13. So, depending on the year you choose, the last 3 years net farm income is down between 13 and 21 percent compared to the 1990’s average. It’s still a significant downturn but not quite the dramatic collapse that often gets reported.”

Mintert also discussed looking at the bigger picture for supply and demand.

“We pulled a lot of acres into production here in the U.S., but we’ve also done that on a worldwide basis. So, that’s really changed the perspective quite a bit, and I think it’s a more important than ever that people spend their time thinking about the supply demand balance, not just in the US, but around the world. As we look at those numbers, although we’ve seen some weakness in commodity markets here recently based on improving production prospects in the U.S., on a worldwide basis it looks like the supply demand balance is really starting to tighten up.”

While it’s been a bearish month for the ag markets, Mintert says that global supply tightening could provide a rebound.

“That maybe puts us in a position of having the potential to see some improvement in prices, or some rallies in prices, if we see some production shortfalls either in the U. S. or elsewhere around the world. Of course, right now, it doesn’t look like a production shortfall in the US with the improving weather conditions. We’ll see how that plays out over the next month or 6 weeks.”

Mintert will give the presentation again as ACI will hold its final regional meeting on Thursday, June 28, at Vincennes University. Former Indiana Farm Bureau President Don Villwock will be the keynote speaker.