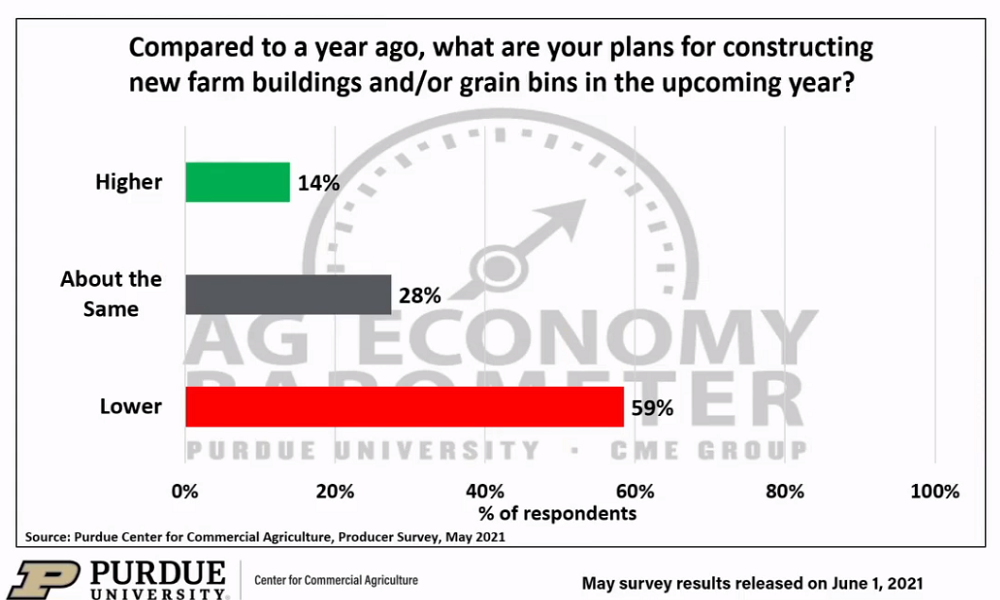 Back in mid-May, agricultural producers weren’t in the best frame of mind. From the 10th to the 14th 400 U.S. producers were surveyed for the Ag Economy Barometer and their responses led to a 20-point decline in the May barometer to an 8-month low of 158.

Purdue University and CME Group create the regular update, and Purdue’s Jim Mintert says that taxes are a driver of this decline.

“There are a number of tax policy changes under consideration in Washington, and so we continue to ask farmers their perspective on tax policy, especially with respect to the impact it might have on estate taxes and their ability to pass farms onto the next generation of farmers in their family,” he explained. “Overwhelmingly farmers are telling us that they are very concerned about changes in tax policy, making it more difficult to pass their farm onto the next generation.”

The report says producers were less optimistic about both current conditions and the future of the agricultural economy, as both the index of Current Conditions and index of Future Expectations fell.

There was also a 10-point drop in the Farm Capital Investment Index for a couple of reasons, Mintert says.

“There was an increase in the number of farmers who said they planned to reduce their farm machinery purchases in May vs. April, and as you look at a new question this month, we asked people what their plans are for constructing new farm buildings and/or grain bins in the upcoming year. Fifty-nine percent of the producers said they plan to reduce their purchases and construction of new farm buildings and grain bins.”

Rising input costs, and some are rising significantly, are also driving the overall barometer lower.

There are still some positive takeaways from the May Barometer, even though producers expressed less optimism about their farm’s financial performance this month. The Farm Financial Performance Index declined to 126 from a record high 138 in April. Although May’s index was 12 points lower than a month earlier, it was still the second highest reading since the financial performance question was first posed in spring 2018, suggesting strong crop prices continue to support farm incomes.

After declining last month, the Long-Run Farmland Value Expectations Index rose 10 points to a record high reading of 158, with two-thirds of producers in the survey saying they expect farmland values to rise over the next five years. The Short-Run Farmland Value Expectation Index remained near its all-time high, falling just 2 points below the record high set in April of this year.

Producers’ expectations for good versus bad times in U.S. agriculture have undergone a marked shift. For example, in May just 27% of respondents said they expect good times in U.S. agriculture during the next five years, the lowest reading in the survey’s history and down 12 points from a month earlier. One driver of this shift appears to be the discrepancy between expectations for the crops versus livestock sectors in the upcoming five years. This month over half (54%) of respondents said they expect widespread good times for the crops sector in the next five years, whereas just one-fourth (26%) of producers said they expect widespread good times for the livestock sector.

“The difference in expectations for these two principal sectors of the agricultural economy could help explain why producers appear to be very bullish about farmland values and cash rental rates while at the same time expressing less optimism about both current conditions and future expectations for the agricultural economy overall,” Mintert said.