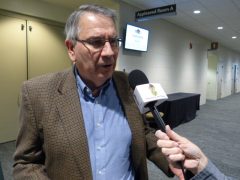 The implications of the new tax reform law are trickling out, and it looks like many of the changes will be beneficial for agriculture. Dr. Chris Hurt, ag economist at Purdue, says the new provision for pass through income will benefit many farm families, “For example on schedule F that farmers will out for their income from the farm, that passes through to the front page of the 1040 tax return and the first 20% would not be taxed.” Hurt said, if the income from the farm was $100,000, a farmer would only be taxed on $80,000.

Hurt says the tax rates were lowered and the brackets were widened and that will put more money in the pockets of all tax payers, “With about $100,000 in taxable income, the tax reduction would be in the area of $200 per month.” He added this is not only good news for farm families but also for all taxpayers. The increased money in the pockets of all tax payers will stimulate the U.S. economy, and that increased demand will be good for agriculture. Hurt says the ability to deduct the cost of farm machinery and buildings in the year they are purchased will also be welcome news for many farming operations, “So if your farm shows a profit of $250,000 and you buy equipment that costs $250,000, you can deduct the total amount in one year and not have to depreciate it.”

One issue still unresolved is how income from co-ops will be handled. Due to some problems in the original legislation, technical corrections may need to be passed by Congress in the coming months.

While the estate tax was not done away with, Hurt said the exemptions are now so high it will not be an issue for most farmers.