Technology on Display at NFMS 2018 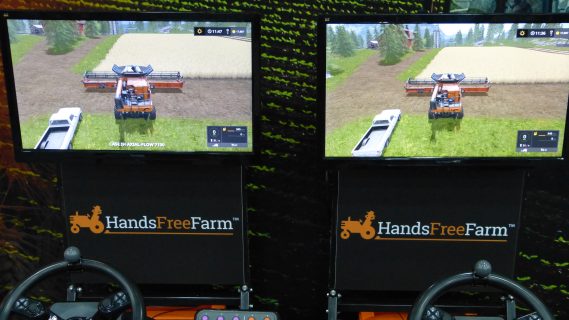 Nearly 900 exhibitors have filled the Kentucky Exposition Center in Louisville for the National Farm Machinery Show to show off the latest and greatest in farm technology.

Hands Free Farm from Outback Guidance is looking to bring autosteering to every farm in America. The farm simulators at their booth were being driven by children when I stopped by, because of the video game appeal, but Darren Pritchard, Director of Sales for Outback Guidance, says that more than just kids have stopped by to “play”. “We’ve had parents and grandparents in here driving this combine as well. So, you’re supposed to be able to combine that in four passes, autosteer can do it in four passes, and we’re finding that many people cannot do it in four passes. The benefit of autosteer is just the fact that you can do it faster, with less overlap, and you’ll save time and fuel.”

Pritchard says that the idea that autosteering is only for big farms is a misconception. Their base package for autosteer is $6,000. “The USDA came out with a study saying that farmers can actually save $15 an acre by using autosteer. So, we’re showing that people can pay for the entry level broad acre package for as little as 400 acres.”

More information on that and other packages at handsfreefarming.com.

Coverage from the National Farm Machinery Show in Louisville, KY is presented by Farm Credit Mid-America.