The Legacy of Mauri Williamson

A familiar face at the Indiana State Fair and driving force in Indiana agriculture has died. Mauri Williamson lost his battle with cancer this week at the age of 91. Almost anyone involved in the Indiana State Fair or who graduated from the Purdue College of Agriculture has felt the influence of Mauri Williamson. Executive Secretary of the Purdue Ag Alumni Association for 37 years, the Wayne County native is best known for creating and growing the Pioneer Village exhibit at the Indiana State Fair.  Fair Director Cindy Hoye says Mauri was a visionary, “He understood the soul of this place. He understood how to be a showman; and, with his charm and his wit, he put his mark on this place.”  The State Fair was always a part of Mauri’s life. He attended the fair as a farm kid growing up in Economy, IN; and, after returning from the war in 1946, he was at the fair every year.

Hoye says the Northside of the fairgrounds that today encompasses multiple buildings and exhibits dedicated to showcasing the past, present, and future of agriculture had its beginning with Mauri Williamson, “I can go back into my records 35 years and see how Mauri had a vision that was much bigger than any of us realized.”  This drive and passion for agriculture never waned. As recently as two weeks ago, Williamson was in Hoye’s office with a long list of things that needed to be done to improve the Northside of the fairgrounds and the Pioneer Village experience. Hoye says this year’s State Fair will be a tribute to the man who had such an influence of the Fair. 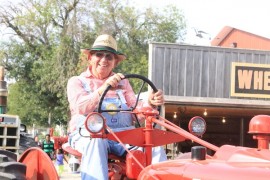 Williamson’s impact was not limited to the State Fair. He also started the Purdue Fish Fry, which will be held this Saturday, where Mauri’s memory will be honored.  His love for Purdue University and the College of Agriculture was enormous.  “With his love for people and farming, and his incredible sense of humor and story-telling abilities, he turned the Purdue Ag Alumni Association into something very special,” said Jay Akridge, Dean of the Purdue College of Ag.  “We were blessed in this state to have Mauri reminding us all constantly about where agriculture has been, why farming is fundamental to all we do, and to encourage us all to make Indiana agriculture even better tomorrow.”

He organized the Ag Ambassador student program and funded a scholarship that annually supports one of the ambassadors. The College and the Ag Alumni Association started the Mauri Williamson Scholarship of Excellence, a renewable gift that has supported dozens of scholars in the College of Agriculture since his retirement in 1990.  “Everything Mauri did was for Purdue and for agriculture,” said Donya Lester, who succeeded Williamson as executive secretary of the Ag Alumni Association in 1990.  “He co-chaired the campaign to construct the Class of ’50 lecture hall because he didn’t want his class to give another gateway, or clock, or statue to the campus. He wanted his class to provide something that would have a lasting academic impact on the students of Purdue.”

Williamson asked that contributions be made in his name to the Giving.Purdue.edu/InMemoryofMauri.