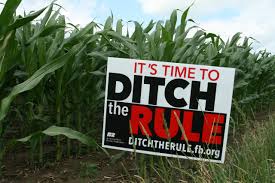 WOTUS Rule Has Been Ditched

On Thursday, the EPA announced a new rule that effectively put an end to the Waters of the U.S., WOTUS, which was one of the most egregious regulations promulgated by the Obama administration.  The old rule effectively gave the government regulatory control of almost any body of water down to puddles and ditches. Farmers called it the biggest land grab in history and launched a multi-year campaign to ditch the rule. Candidate Trump promised to do away with the rule. In 2019, the old rule was terminated; and, yesterday, the new rule was finalized and announced by EPA and the Corps of Engineers.

The new rule was welcomed by most farm groups. “It provides clarity and certainty, allowing farmers to understand water regulations,” said Zippy Duvall, President of the AFBF. Farmers and ranchers care about clean water and preserving the land, which are essential to producing healthy food and fiber and ensuring future generations can do the same. That’s why we support the new clean water rule.”

“We are pleased that this rule replaces the 2015 rule, which was cumbersome and confusing, and that new regulation will better provide certainty and clear direction for our farmers,” said Bill Gordon, soy grower from Worthington, MN., and American Soybean Association (ASA) president. “We have long rallied for a replacement rule that protects our waterways while still offering a workable solution for farmers and that does not impose undue burden on agriculture. We express our thanks to the administration.”

Scott Yaeger, chief environmental council with the NCBA in Washington, stated that the new rule is a victory for agriculture, “This is a significant improvement over the 2015 rule.” Officially known as the Navigable Waters Protection Rule, it sets limits on what the federal government can regulate. According to Yaeger, “It pulls back federal jurisdiction from the 2015 rule, it also provides more clarity to land owners by defining exactly what is a navigable waterway. This way farmers will have an idea if the regulation effects their operation or not.” Yeager says, in addition, the rule provides special exemptions for certain agricultural practices.

This brings to an end the era of WOTUS. “This rule goes final in 60 days, so it will then become law,” said Yeager. He expects legal challenges to this rule by environmental activist groups and said it could end up on front of the Supreme Court. Agriculture Secretary Sonny Perdue said in a statement, “President Trump is restoring the rule of law and empowering Americans by removing undue burdens and strangling regulations from the backs of our productive farmers, ranchers, and rural land-owners.” Farm groups have vowed to support the new rule in court.