The Watch is on for High Path Avian Influenza 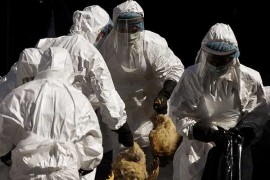 Last year 48 million birds, mostly turkeys and laying hens, were depopulated in response to the spread of Highly Pathogenic Avian Influenza. The watch is on for a return of the outbreak this winter. The spread of the disease that infected poultry operations in the west and here in the Midwest was caused by migrating birds moving north. The concern now is that as those birds migrate back south, there will be a return of the disease.

Maurice Pitesky, with University of California Davis,  says the birds use flyways that take them right over key poultry-producing areas, “These flyways are like freeways, and they interconnect allowing the birds to come in contact with birds from other regions.” He said, for example, some of the birds last spring had virus infections that had been gotten from birds in Korea.

So far, all is quiet, says USDA’s Rob Johansson, “We had had a rather mild fall and early winter, so we are not seeing the large number of migrating birds that we had last spring.” Yet, it is still early and officials are cautious.  Johansson says the industry is better prepared this time around to prevent a massive infestation, “The biosecurity on many of the poultry houses is better, and this should help keep down the infestation.”

He adds, the virus is still out there with reports of HPAI coming in from Europe and some areas of the west coast. Only one case was found in Northeast Indiana last year, but state officials have plans in place should an outbreak occur.