This year has been one that has seen many farming operations making some significant changes due to tight profit margins.  One Indiana grower who made major changes to his operations this year for financial reasons is Dan Gwin. Gwin farms near Linden in Montgomery County. Until this year, he has been growing primarily specialty crop corn that went to make tortilla shells and other food grade products. But declining specialty crop premiums prompted Dan to take the major step of switching crops, “Looking at what commercial corn was and having an ethanol plant in my back door, I felt it was more profitable for me to raise commercial corn and market it locally.”

While many growers this year moved away from GMO hybrids to cut costs, Gwin moved to Biotech crops as a way to cut production costs, “With GMO corn I did not have as much herbicide management and it gave me more flexibility than my non-GMO white corn.” Along with his wife Donya Lester, Gwin did careful analysis before any decisions was made. “It takes a lot of courage to make big decisions,” he said.

Another change for 2016 involved moving from green equipment to red equipment after major repair costs in 2015. Dan said he was planning on leasing equipment for the 2016 season, “But I was in the right place at the right time and ended up purchasing the equipment.” He said this came with a good warranty that will keep his repair costs low, “I was more comfortable knowing I could sustain the operation and not have any major repair surprises like I had in 2015.” 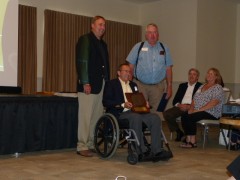 Gwin was one of the Master Farmers honored this year. You can read more on his story in this month’s issue of Indiana Prairie Farmer.