Is it Time to Lock in Basis on Corn? 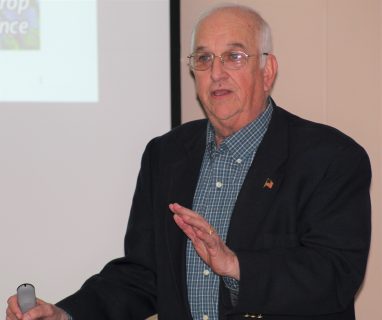 Cass County Purdue Extension hosted a 2019 outlook breakfast Wednesday morning in Logansport. Kokomo Grain’s Mike Silver told the crowd that he wouldn’t go as far as to say he is bullish on corn, but he is “friendly” on corn in 2019, partly because he doesn’t see a large increase in corn acres this year.

Silver said many are still trying to make some tough decisions on their crop mix for next year, though he believes that most folks in this area will stick to their traditional 50-50 rotation as close as they can. He told HAT that he believes the corn market has more life in it than the soybean market where basis levels are historically wide, and he doesn’t believe they will improve this year.

“From a fundamental standpoint, they’re probably a little better than they should be. So, I think it would behoove producers right now to take a good, hard look at their current grain position, old crop they have yet to sell, get some offers in above the market in both corn and soybeans with a lot of time out in front of us yet with these trade negotiations in play.”

Silver said that another factor in the negotiations with China is the time difference of 12 hours. While we are tucked in and asleep in our beds, computers and algorithmic traders are not.

“Some opportunities may come in the wee morning hours where open offers will be filled by the time we wake up in the morning and try to sell something, those opportunities may be gone. So, I’d get my offers into the marketplace at levels that I’m a willing seller and let what’s going to happen, happen.”

You can hear the full interview with Silver below.