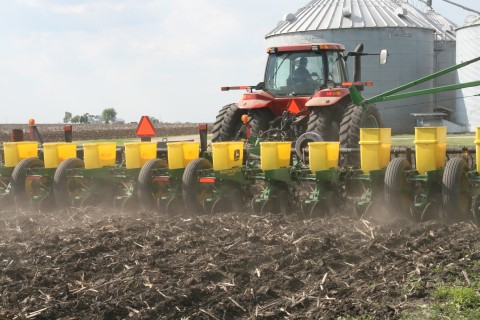 Agronomists have been recommending growers stick with the plan all Spring. Now  Pioneer agronomist Carl Joern said it is time to switch. “Once you reach the end of May it is time to consider switching to a shorter season hybrid,” he stated. “You would want to consider a 110 or 115 day variety in order to get to black layer before the first frost date in October.”

HAT meteorologist Ryan Martin sees good drying conditions on Tuesday but more rain on the way later in the week. “Tuesday continues to be our partly to mostly sunny, completely dry day. We expect good drying and excellent evaporation for that day,” he stated.  “However, the problem is that we only get that one day. Rain and thunderstorms return on Wednesday the 29th, bringing 0.25 inch – 1 inch rain totals over 80% of the state. There can be a few lingering showers into Thursday with an additional few hundredths to a tenth or two, but dwindling coverage. Without that, the state turns out partly sunny for Thursday. Friday goes partly sunny, but clouds will be on the increase late.”

Winter wheat condition in Indiana  remained mostly unchanged, though excessive moisture has caused concern. Pastures benefited from the abundant rainfall; and hay has grown quickly but is too wet to cut in many areas. The amount of rainfall varied from 0.48 inches to 2.72 inches over the week. The statewide average precipitation was 1.83 inches. There were 1.8 days suitable for fieldwork for the week ending May 26.