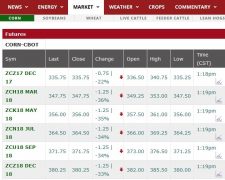 There is plenty of equipment on display at the Indiana-Illinois Farm Equipment Show at the Indiana State Fairgrounds, open through Thursday. There is also plenty of opportunity to talk about the seed that equipment puts in the ground when you stop and talk with the seed companies. Sam Lentz with Seed Consultants says farmers are evaluating what they’ll plant next year, and some are making the switch, or contemplating the switch to soybeans. 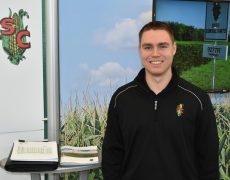 “I’ve seen a lot of guys this past month, before Christmas, that are looking to finalize some stuff and really switching to heavy bean numbers, canceling off a lot of corn,” he said. “Actually, a conversation I just had here at the booth, same story. You know guys are sitting down, sharpening the pencils to see where they can make money. Right now where prices are at, beans make a lot of sense especially if we have an average corn yield year across the board. With input prices continuing to look like they’re going to tick up just a little bit, beans are definitely looking like a good option for guys.”

Spencer Carson covers central Indiana for Beck’s Hybrids and says a lot of his current customers have made decisions on their 2018 plan.

“The market has shifted around making some guys maybe think second on some things, but I would say 90 percent of my customers have figured out a plan for next year at 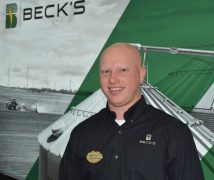 Carson though, has seen a different trend in acre switching.

“I would say the guys who have been heavier beans the last couple of years have started to trend back to some more corn acres now, especially going bean on bean year after year. So definitely some guys leaning back toward the corn acres, but with the markets we’ve still got a long ways to go before planting season next year.”

Lentz says it appears more farmers this year will continue to consider their options through the winter.

“I would say a lot more kicking around, not that guys haven’t talked about an order or gotten an order in. But, I think there’s going to be a lot more switching this year from a numbers standpoint and also from what bean program to go with, with the Extends, the Libertys, the R1’s, what’s going to work best for them with their weed pressure and what they’re seeing from their neighbors. This has been a tough year decision-wise,” Lentz added, and “I think it’s going to be a busy year going into the winter and the New Year with guys finalizing a plan for their farm next year.”

Both Lentz and Carson agree, the pencils are sharp and all eyes are trained on the markets.