My most recent article about whether government agencies will use drones to monitor agricultural activities has struck a nerve with many readers.  So much so that I thought the topic deserved more attention, so I’ve been digging a little deeper.  It turns out that all this excitement about drones is really premature, as the Federal Aviation Administration (FAA) has not yet authorized unmanned aircraft systems (UAS) for use in commercial agriculture.

I won’t pretend to be an expert on FAA regulations—as they deviate pretty far from my day-to-day work with agricultural legal issues.  Here’s what I do know.   The FAA controls the airspace above us.  Drones, or UASes in FAA terminology, are not permitted to fly in U.S. airspace unless they meet the standards of remote controlled airplanes and helicopters.  Those standards require that the aircraft be flown at low altitudes and within sight of the person controlling the vehicle on the ground.   Many drones are capable of using GPS for guidance and fly without any direct human control.  This takes them outside of the uses the FAA permits for radio controlled hobby aircraft.

The problem with unmanned drones from the FAA’s perspective is that they are “aircraft”, yet they lack the ability to follow the rules regarding air travel.  A typical pilot can spot other aircraft in his vicinity.  An unmanned drone cannot.  Imagine a drone travelling out to take pictures of a field on the same day that a farmer in a neighboring field decides to crop dust it.  The FAA is sorting out these issues and until they do, commercial drone use in agriculture will remain a technology for the future.

However,  the FAA is working on making commercial drone use a reality.  Recently this year it certified two drones for use in Alaska—one to look for ice flows and migrating whales in oil exploration areas and one to look for oil spills and monitor wildlife in remote locations.

Drones’ promises for agriculture are huge.  But, it will take some time to sort out the legal issues and regulations.   No need to look up just yet. 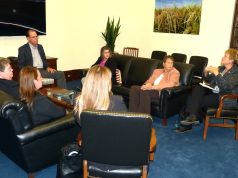