Despite the instant rhetoric denouncing the Republican tax reform framework, Indiana farmer Kip Tom from Kosciusko County is optimistic that it is good for America and can become law. President Donald Trump referenced Tom while talking about the estate tax during his Indianapolis speech Wednesday. Tom said elimination of that tax will eliminate a major hurdle when farms are transitioned to the next generation.

“I can think of an example in our local neighborhood where a grandfather died and his son died within a 3-year period, and they ended up paying full estate taxes for both individuals in a short amount of time and they had to liquidate their farms,” Tom said. “Their equipment, and their operations. This is something I’ve seen really happen, so it’s important what the President proposed for all of rural America and agriculture and small businesses. You know it takes a lot to farm anymore. It’s a big commitment in capital.”

Trump touted the immediate write off of a business’s full cost of capital investments. Kip Tom said that would be beneficial to the ag industry.

“I was sitting next to some leadership from Cummins motor, and obviously it gives them the confidence in building equipment and engines across a broad set of industries that will support jobs and job growth. It doesn’t matter whether it’s agriculture or any other industry that can invest in rolling stock and the assets that we invest in. This is a big deal.” 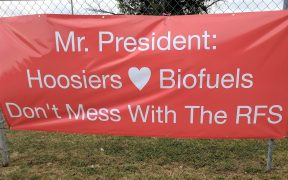 Tom has spoken with members of the U.S Senate and Congress about this weeks’ notice from EPA seeking comment on further reductions in renewable fuel volumes for 2018 and 2019. He also had the President’s ear on the issue Wednesday.

“He understands how important ethanol is to not just agriculture but to our rural economies and more broadly across American consumers, so he’s aware of it. Those of us who are supporters and advocates for the industry are very concerned today that an inconvenient or a misguided decision could be made that could have a damaging impact on agriculture.”

Tom told HAT he was glad to hear the President putting the spotlight on Indiana, “a state that understands tax reform and the benefits of tax reform.”