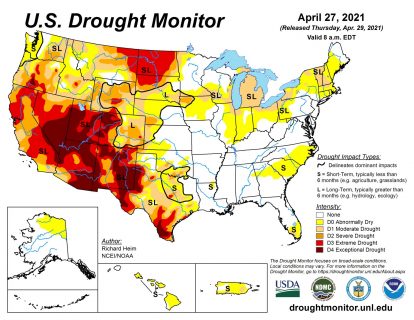 Large parts of Iowa, Wisconsin, Illinois, Indiana, and Ohio are abnormally dry, and most of Michigan is in moderate drought due to limited spring precipitation.

“Much of the Ohio Valley states, as well as Iowa to lower Michigan, had little to no precipitation over the past week,” the drought monitor reports.

Almost all of Michigan’s Lower Peninsula and the eastern third of its Upper Peninsula were in moderate drought. Precipitation deficits over the last 90 days have been building, streams are low, and soil moisture continues to dry in the Lower Peninsula.

The USDA rated topsoil moisture as short or very short in half or more of Colorado, Montana, Wyoming, South Dakota, and North Dakota. Several Colorado counties were asked to voluntarily conserve water.