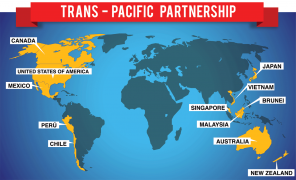 The Trans-Pacific Partnership trade deal’s troubles in Congress are threatening more than trade. The road blocks are also having an impact on President Barack Obama’s strategic pivot to Asia which is also in trouble as the Philippines pivot to China, China expands its influence in the region and Japan questions Washington’s commitment to the TPP trade deal.

Democratic presidential candidate Hillary Clinton says if elected, she will still be against TPP, and her GOP opponent Donald Trump is also against TPP.

“I think the immediate consequence of if there isn’t any action this fall is that you’ll see the ratification process in some of these countries stop, or at least slow down,” he explained. “They’re looking for the US to lead. They want to do this at the same time the US does.”

Japan’s Prime Minister has been expending political capital to get his legislature on board with TPP, and faces a likely backlash if the U.S. fails to follow through.

The political, economic and strategic significance of TPP is not lost on other allies either, according to Salmonsen.

“I know a lot of the countries, especially through their ambassadors here in Washington have been very active in pointing out the the economic benefits and the strategic needs of the region and why they want the TPP to go forward, why they want continued U.S. leadership.”

The Washington Post concluded in a Monday editorial, citing the Philippine realignment: “the pivot to Asia is looking rather unsteady, and it is worth fighting for.”