China has reportedly told its commodity buyers to stop all imports of U.S. agricultural products. The move is in response to President Trump’s planned tariff increase announced last week of an additional 10% on the remaining $300 billion worth of Chinese goods. Republican Senator Todd Young weighed in on Trump’s tweet last week. 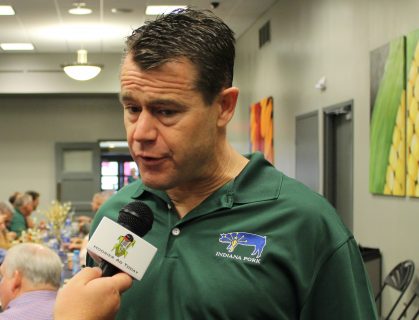 “Look- I think most people recognize that the Chinese have been ripping off our intellectual property and flooding our markets with manufactured goods and various commodities for a number of years. These unfair and predatory trade practices do, indeed, need to be addressed. So, that’s the rationale behind the tariffs. With respect to the president’s most recent move, it’s unclear to me whether it’s intended to sort of get the Chinese off balance as another round of trade negotiations is entered into by our negotiators or if instead, he’s thinking something else.”

China also announced the devaluation of its currency Monday, an action one Rabobank researcher told Bloomberg News is “among the worst-case scenarios.” However, Arlan Suderman, Chief Commodities Economist with INTL FCStone says that China may have blinked first in this move as more support for the yuan came in overnight Monday.

“They came in overnight and actually supported their currency, and so we saw a little bit more stability today (Tuesday) in the currency markets and in the outside markets as a result. They didn’t just let it keep floating down,” Suderman explained. “The weakness in the yuan, first and foremost, means that there’s concerns about China’s economy. It means that there are some concerns. So, it’s actually a little bit of hope that maybe this is a sign that China’s enduring quite a bit of pain and maybe it will want to come back to the negotiating table.”

China appears to be waiting out the upcoming November 2020 U.S. elections to see if the political climate in the U.S. will change. The announcement Monday by China follows news that it was buying U.S. ag products, as promised in prior talks, just not at expected levels due to “market conditions,” specifically lower demand due to African Swine Fever.