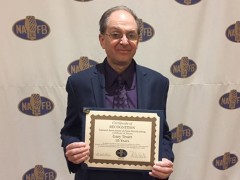 The National Association of Farm Broadcasting (NAFB) honored Gary Truitt, Hoosier Ag Today founder and President, for 35 years of service to American farmers. Truitt began his career in farm broadcasting in 1981 at the Brownfield Network in Missouri. He moved to Indiana to launch what became the AgriAmerica Network. In 2006, he formed Hoosier Ag Today to exclusively serve  the agricultural community of Indiana.  Truitt was recognized at the annual NAFB convention last week in Kansas City.

Hoosier Ag Today currently has 65 radio stations broadcasting its programs.  In addition, HAT operates a multi-media web site, smartphone app, and publishes a daily e-mail newsletter.  In 2008, 2010, 2012, and 2016 Hoosier Ag Today was rated the most listened to farm radio network in Indiana by Ag Media Research.