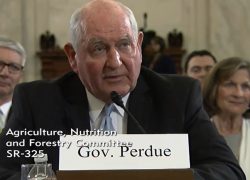 Finally. Thursday the Trump administration choice for USDA Secretary finally met the Senate Agriculture Committee for the nomination hearing. It has been over two months that USDA has been waiting to learn if former Georgia Governor Sonny Perdue will be confirmed. In a season of very partisan confirmation hearings, Perdue’s tone suggested more optimism for now and the future.

“I’m pleased to know that reaching across the aisle is common practice within this committee, where partisanship doesn’t get in the way of good solutions for America’s farmers, ranchers, and consumers,” he said. “If confirmed as the Secretary of Agriculture, I look forward to working with you, all of you. The makeup of this committee speaks to the size, the reach and diversity of America’s agriculture sector.”

Questioning from committee members went straight to agriculture’s big issues, including the new farm bill, trade and the President’s budget. Committee Chairman Pat Roberts stressed the need for agriculture to be a top priority among the U.S. Trade Representative and other administration officials.

“Thank you, Mr. Chairman, and you’re absolutely correct, and I think as Senator Stabenow mentioned, agriculture needs a strong advocate, a tenacious advocate regarding one of the top issues. We’re blessed in this nation to be able to produce more than we can consume. We’re grateful for that but obviously, that implies that we need to sell that bounty all around the world, and you’re correct. The relationship between USDA and its trade representatives as well as the USTR, as well as Secretary Ross and Commerce will be vital.”

Ranking member Debbie Stabenow expressed concern about the proposed twenty-one percent budget cut for USDA, and Perdue responded by saying he has experience working with less than optimal budgets.

“Obviously as a member of the administration I view this budget similar to what as governor when I would get a revenue estimate that I didn’t like as well,” he explained. “I didn’t like it but we managed to it. If I’m confirmed I’m going to get under the boards and get some room and work for agricultural producers and consumers to let this administration and any of the people making those decisions in that budget area, know what’s important to America.”

Perdue also assured the committee it will have the full support and resources of USDA in as they continue farm bill hearings and information gathering for the 2018 farm bill. The Senate Ag Committee will hold a separate business meeting to vote on the Perdue nomination. That vote has not yet been scheduled.