McKinney on Pence for VP 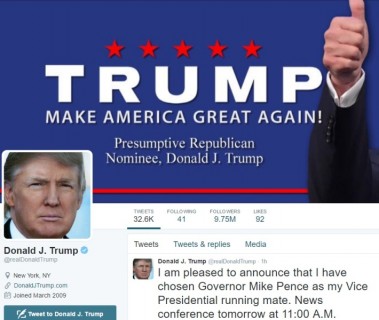 Finally, after variousnews reports and a delayed unveiling because of the Nice terror attack, Republican presumptive presidential nominee Donald Trump tweeted confirmation Friday morning that Indiana Governor Mike Pence is his pick for a Vice President running mate. Reaction from Indiana agriculture has come quickly, and the sector believes it is a smart move for Trump.

“Donald Trump has selected as his running mate a man of unimpeachable integrity, broad experience and a deep love of this country,” Lt. Governor and Secretary of Agriculture Eric Holcomb said. “Governor Mike Pence’s record of leadership in balancing budgets and supporting a business climate where ingenuity can flourish will be invaluable and needed assets to the country. The governor’s selection also reflects well on the tremendous successes Indiana has achieved over the last 12 years and the Trump/Pence Administration will be great partners as we continue to move Indiana forward.” 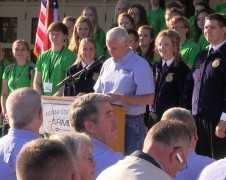 “He has talked about growing up and looking out in the backyard on fields of grain and I think he showed that in his time in Congress, and certainly there was never a time in my interface with the governor that he wasn’t interested in what’s going on in ag and looking and asking for ways in which we can lift it up. A great example was the time when he asked me to take on a second assignment within the IEDC leading agribusiness economic development.”

He added the selection by Trump brings many things to the ticket, first Pence’s experience and bio.

“I think his time and leadership in Congress will be very important and equally so will be his time as governor where he’s clearly delivered a great deal, not the least being economic development. So he has seen governing and government from all the right and different angles.”

And McKinney addressed the benefit of Pence’s “terrific” judgement and temperament.

“He’s just one of the kindest souls, the most sincere souls that I’ve ever met and worked with and I think you need that in both the campaign and then in governing, presuming that he and Mr. Trump are successful.”

From the Hoosier corn and soybean organizations, Jane Ade Stevens said, “Governor Mike Pence has been a good leader for Indiana agriculture during his time at the Statehouse. We are pleased Donald Trump has chosen a running mate with an understanding of Middle America. We look forward to continuing to work with Governor Pence to promote the important role agriculture, including Indiana corn and soybean farmers, plays in our nation’s economy.”

Don Villwock, former President of Indiana Farm Bureau and longtime friend of Mr. Pence, told HAT, “He is our dream agriculture candidate.”  Patrick Pfingsten, agricultural lobbyist with the Corydon Group, said Pence brings an understanding of ag issues to the campaign that has been lacking, “There is no one who has less credibility on ag issues than a billionaire from Manhattan, so having Pence on the ticket is good for agriculture.”

Watch for continued coverage and analysis from Hoosier Ag Today all weekend long.