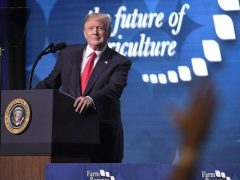 For the first time since 1992, the President of the United States attended the annual meeting of the American Farm Bureau Federation underway this week in Nashville. In his remarks to the closing General Session, the President said he is working on a NAFTA agreement that is fair for U.S. agriculture, “On NAFTA, I am working very hard to get a better deal for our farmers and ranchers and for our manufacturers.” He added the negotiations, which are underway, are difficult. He also pledged to review all U.S. trade agreements, “To make sure they are fair and reciprocal.”

Mr. Trump got a standing ovation when he talked about the elimination of the estate tax in the just passed tax reform measure, “From now on, most family farms and small business owners will be spared from the punishment of the deeply unfair estate tax. Now you can keep your farms in the family.” 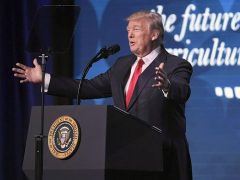 The President also promised to continue his efforts to cut regulations including the WOTUS. “For years, many of you have endured burdensome fines and regulations from a variety of government agencies, including the EPA and the FDA,” he stated. “The attack on your way of life has ended.” Mr. Trump said, for every new federal regulation put in place, 22 have been eliminated since he took office.

In an obvious reference to upcoming mid-term elections, the President said, if democrats regain power, they will raise taxes and reimpose federal regulations against farmers. Mr. Trump pledged to stop chain migration, the immigration lottery system, and renewed his pledge to “build the wall.” He did not mention, however, any provision for a guest worker program or a way to provide a legal labor force for agriculture. The President also voiced strong support for a new Farm Bill that contains funding for Crop Insurance. 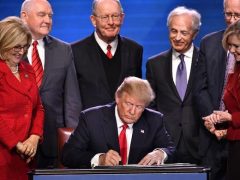