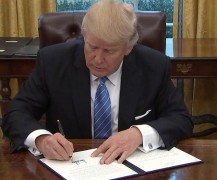 President Donald Trump has left the door open to rejoining the Trans-Pacific Partnership through comments in a recent speech. However, the TPP 11 countries may not be as welcoming, forging ahead to sign an agreement in March. Addressing the World Economic Forum in Switzerland last week, Trump said of the TPP nations, the U.S. would consider negotiating with them “either individually or perhaps as a group if it is in the interest of all.”

In an interview with CNBC, he was quoted as saying, “I would do TPP if we were able to make a substantially better deal.” The original TPP agreement was expected to be worth billions of dollars for U.S. agriculture. However, New Zealand Trade Minister David Parker points out that the U.S.’s negotiating position was “of course weakened” by its withdrawal a year ago from the original agreement. Further, there is currently little expectation that the U.S. would move to rejoin the TPP agreement.