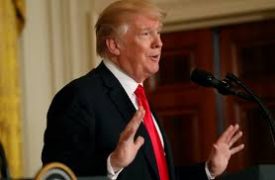 The media drumbeat of condemnation of the tariffs on steel and aluminum announced by President Trump on Tuesday continued over the weekend as world leaders publicly denounced the policy. Yet privately, many nations are moving to consider trade concessions that would exempt them from the U.S. tariffs. Canada and Mexico were temporarily exempted pending a NAFTA agreement and rumors over the weekend indicated Australia may be next to escape.

In signing the order last week, the President made it clear that if Canada and Mexico made concessions during the NFTA negotiations, they would be exempted from the tariffs. “Right now we are negotiating NAFTA with Canada and Mexico, so we are holding off the tariffs to see if we can make a deal on a new NAFTA treaty,” he stated. The president made it clear, however, that if a deal is not reached, the tariffs would be imposed, “If we terminate NAFTA because they are unable to make a deal that is fair for our workers, fair for our farmers, and fair for our manufacturers, then we will terminate NAFTA and start all over again.”

While that kind of talk makes agriculture very nervous, Mr. Trump said he is optimistic there will be a NAFTA deal, “I have a feeling we are going to make a deal on NAFTA.”

Canada has been particularly recalcitrant in making any concessions on its dairy policy, a key issue for the U.S. where dairy producers are suffering economically.  The White House is hoping the threat of steel tariffs will help break the logjam in the talks. The talks had been scheduled to end this month, but all sides plan to keep working to try to reach an agreement no matter how long it takes.

In seeking to win a respite from the tariffs, American allies tried a mix of persuasion, threats, personal appeals, and diplomatic leverage. On Saturday, Cecilia Malmström, the European Union’s trade commissioner, met with the United States trade representative, Robert Lighthizer, in Brussels, after a meeting that also included Japan to talk about steel overcapacity. There was no resolution of the tariffs issue, however. European Union countries have been compiling a list of American products that could be subject to reciprocal levies. The provisional list correlated strongly with Republican congressional districts and included Harley-Davidson motorcycles, bourbon, rice, kidney beans, sweet corn, tobacco, and peanut butter. Brigitte Zypries, the German economics minister, wrote in a letter to Wilbur Ross, the United States commerce secretary, that Europe and America should work together to address the real problem: a global glut of steel production that has driven down prices.

Still, there were signs that attempts by some countries to win tariff immunity from the United States were sowing tension among European allies.

Liam Fox, Britain’s international trade secretary, told the BBC on Friday he would “be looking to see how we can maximize the U.K.’s case for exemption” when he visits Washington next week. The suggestion that Britain might go its own way provoked a rebuke from Jyrki Katainen, European Union vice president for jobs and competitiveness. “We cannot accept that the E.U. is divided to different categories,” Mr. Katainen said

Chinese leaders, while denouncing the tariffs, have said a trade war with the U.S. is not good for either side.  Chinese commerce minister Zhong Shan said, “There are no winners in a trade war. It will only bring disaster to China and the United States and the world.” He added, China can handle any challenges and will resolutely protect its interests.