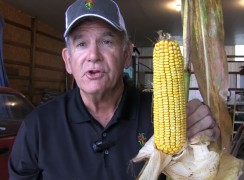 Indiana farmers are working hard to get their crops out of the field as soon as they are ready for harvest, and a late-arriving disease this year is another reason to get to the corn crop before weather takes down the stalks. Anthracnose leaf blight starts at the top and works its way down the plant and stalk rot eventually comes in to play, according to agronomist Bill Mullen. He found the disease in a corn field this week between Greensburg and Batesville just off I-74.

“All these black lesions on this plant are the spores. When you look at this plant this is the base and this node is rotten. Second one is rotten, third one is rotten, fourth and fifth ones are rotten, and this pith is really drying out. So basically we’ve got some stalk issues out here and this is a big concern that I have trying to get the crop harvested. We know it’s not going to be able to stand out there, especially if we get any heavy winds.”

You can see what Mullen found in the new HAT video with the Seed Consultants agronomist. In the non-GMO corn field he also found corn plants invaded by European corn borer, plants that were dropping ears because of the pest.

“One thing I’ve been seeing a lot of this year, especially in conventional corn is the presence of European corn borer. Pretty much 2nd generation is doing some damage out there. When I was walking in the field I saw several dropped ears and in this ear the corn borer went into the shank and normally it can go up into the ear itself. With this ECB damage, nice size ear like this, and with the weak shank there’s only one way it’s going to go. It’s going to go down on the ground.”

Mullen’s message is a familiar one. Prioritize at risk fields and get them harvested as soon as is feasible.